I have been a big supporter of Make A Wish for a number of years – first as a donor and as an attendee at their events, and now as a member of the board of directors for the local chapter. It is a great cause in more ways than I can describe here – who knows, maybe I’ll save that for another post.

Anyhow, my company, Corsair, makes components for enthusiasts who like to build incredible, souped-up computers, like the ones linked below.

A large part of our customer base is pretty young – teenagers who like to build their own computers, tweak them to get the ultimate performance, then play games on them or show them off to their friends. So for all the years I have worked at Corsair and supported Make A Wish, I have truly dreamed that the day would come when a wish child would request a computer-oriented wish that I could help out with. And it seemed like that day would never come!

Until this summer, that is…

ay, the Wish finally surfaced. A young man named Aiden had submitted a wish to build his own computer. And, to my great amazement and pride, he specifically indicated that Corsair was his favorite brand! So, it was with a great sense of pride, honor, and excitement that we set about making this wish happen for Aiden.

At Corsair we make nearly everything that you need to build an awesome PC – except for a few critical components, like the CPU (usually made by Intel) and the graphics card (usually made by Nvidia). Fortunately, we have friends at both those companies and a few calls and emails made it clear that both of them, cut-throat competitors in normal circumstances, were very eager to get involved.

The wish day was incredible. Aiden traveled with most of his family; his parents and three brothers. We started the day at Intel, to pick up the CPU. While we were there, the folks at Intel took us into one of their advanced labs and showed us some extremely cool demos and technology.

After collecting our CPU at Intel, we went to Nvidia to collect a couple graphics cards. Nvidia pulled out all the stops; as a graphics company, they have some incredibly cool stuff to show, and they did not hold back.

Once we had the CPU and graphics card, it was time to head to Corsair to help Aiden build the PC. The team there had some surprises up their sleeves, like totally custom internal cabling and a specially customized side panel for Aiden’s PC. 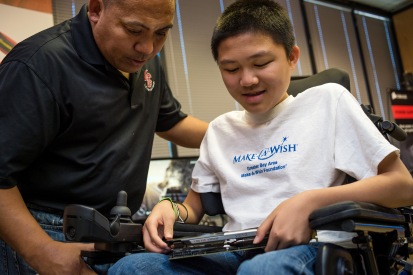 What a day! The build was finally done around 5PM, with everyone completely exhausted. The next morning, one of the Corsair engineers went to Aiden’s house, made sure the rig was completely installed with all three monitors optimally configured, and left it to Aiden to optimize and tune his new PC.

There were lots of great things about the whole experience, but I will just share a couple of them, the ones that really stay with me.

First of all, I was profoundly impressed by Aiden himself. Fourteen years old, with muscular dystrophy, my toughest day pales in comparison with his easiest day. In spite of that, he is serious and focused. I asked him what he wants to do when he grows up, he said he wanted to start and run his own company. He knows his computer gear. And he has a smile that lights up the room.

Second – granting the wish brought out the best in EVERYONE. All participants took substantial time out of their very busy day – from engineers in the lab to CEOs of billion dollar companies. The air was thick with the spirit of enthusiasm, of generosity, and yes, with the joy of being a computer geek. Everyone pulled together to help make the day special for Aiden, and I believe in turn made the day special for themselves as well. It was one of those days when you just can’t help but be blown away by the goodness that truly is inherent in ordinary people.

The video below gives a pretty good summary of the day, I encourage you to have a look! And, to think about how you can help make someone’s wish come true…

Finally… getting back to writing something! Trust me, it is not that nothing has been going on… it is just that for some reason, I have simply not felt inspired. Might also be because, embarrassingly, I have not touched the boatbuilding project since May! Maybe I’ll do some catching up later. But for now, I’ll stick with more recent events…

The big news is, we just got back from taking Brian to college at Yale. He seems to be jumping right in, as I expected he would. He’s taking a pretty demanding workload, including the next level of calculus and a pretty advanced chemistry class. Living on the fifth floor of a dorm built in the 1920’s with no elevator and no air conditioning, so he is still adjusting to East Coast heat and humidity.

Some pictures from Brian’s move-in at Yale

After dropping Brian off, we decided to console ourselves by spending several days at Lake George, up in the Adirondacks. It’s hard to imagine anything that could be a better consolation! We spent a few days with my Aunt Julie and a few days with my cousin Ginger, and took a one-day side trip to Vermont. A little kayaking, a little boating, a little driving around, some lovely meals, great weather… all this took our minds off the fact that we would be returning to an empty house. 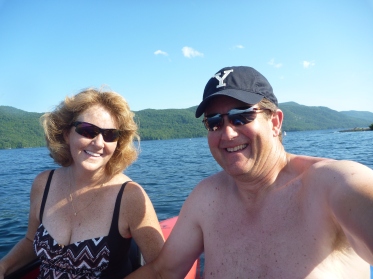 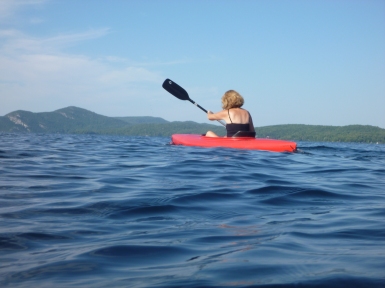 Fun times in the Adirondacks, and at the Farmhouse Inn in Vermont

We concluded our trip by heading down to Rhode Island for a couple days to visit with my dad, John Sr., and his wife Ann. Got to celebrate an 83rd birthday while we were there, and saw the sights of Bristol and Newport.

We are back home now, and getting used to the quiet house. Not so much of an adjustment, really, since once the boys got drivers licenses they were often out doing stuff. But, still, it can be a little eerie at times. But, to be honest, we are adjusting and enjoying it. After all, having the kids eventually grow up and move out is the idea, isn’t it?