… but we did not sit around this weekend wondering how much of our yard is going to still be alive by the end of the summer. Instead, the prudent thing to do seemed to be to make the best of it!

The forecast called for a high of 74 degrees in Santa Cruz on Saturday, which was simply impossible to resist. We pulled the surf skis out of their intended winter hibernation, and hauled them down to the Yacht Harbor for some wintertime paddling. As you can see from the pictures below, I remembered to do everything except clean off the lens of the GoPro… 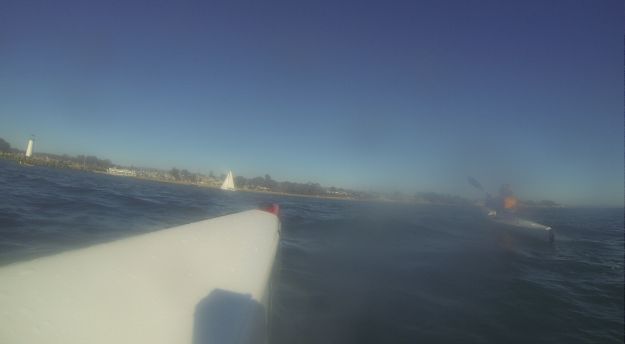 After an hour or so of vigorous paddling, Karen and I decided to reward ourselves with a drink and a snack at the Crow’s Nest. We used to go here all the time when we first met, after sailing the Hobie Cat, and were pleased to see that after twenty-six and a half years (!) the bar at the Crow’s Nest is virtually unchanged. Still the same pictures on the wall, still the same appetizer menu, still a bunch of aging beachcombers sitting at the bar,

Sunday was beautiful as well, so I decided to get some quality mountain biking done. As I remembered to clean the camera this time, here are a couple nice shadow-selfies, along a few minutes of video. Enjoy!

And here’s the video…

I have been making wine in my cellar for the past half dozen years or so, but this year I found myself getting tired of it. Why am I getting tired of it, you might ask? I guess there is no single reason, but several things combined. First, the grapes I am working with, which are growing in my yard, just aren’t that good. They don’t get ripe enough, and the pH tends to be too high. This makes it tough for an amateur like me to make wine that is good enough for me to want to drink it. Second thing is, even when the wine is pretty good, it is tough to get rid of. My vineyard would usually yield ten to twenty cases, which is a LOT of wine. Finally, I guess I just get bored doing the same exact thing year after year, trying to make incremental improvements each year. I just don’t have the patience for it.

I like to have “projects” though, something outside of work to apply myself to, use my brain and my hands a bit. And to keep myself from getting bored, particularly during the winter.

I have wanted to build a boat for many, many years, so I decided to switch gears and give that a go. Temperamentally, I am a big-picture guy who is terrible at detail work, so I figure boat building would force me to correct this flaw. I have never been that attracted to mechanical work, so I figure it is better for me than, say, restoring cars. Finally, I want something at the the end of the project that I can enjoy and be proud of.

And, I have always loved boats. So here we go.

A bit of background… I grew up going to Lake George in the Adirondacks every summer. My grandfather, Bob Henry, was into boats, and had some pretty spectacular hydroplanes – gentleman racers from the Gold Cup races that were held on Lake George in the 1930’s.  Chloe, originally and currently named Ethyl Ruth IV, was a 1934 Gold Cup racer by Hackercraft. Juno was a Ventnor, one of the first racing boats with sponsons, originally (and incredibly) built as a suicide torpedo boat for the Chinese Navy. Sadly, both were sold for a pittance when my grandfather died in the early 1970’s to settle the estate; breaks my heart to think about it! And, as you can see, both have subsequently been beautifully restored, and are one-of-a-kind million dollar boats.

Bob’s younger brother Jack was into outboards, and was actually the Mercury dealer in Ticonderoga in the 1950’s for a while. He raced a Raveau DU 16-foot racing runabout  named Gingerly; my cousin Ginger still has her in a garage somewhere I think! 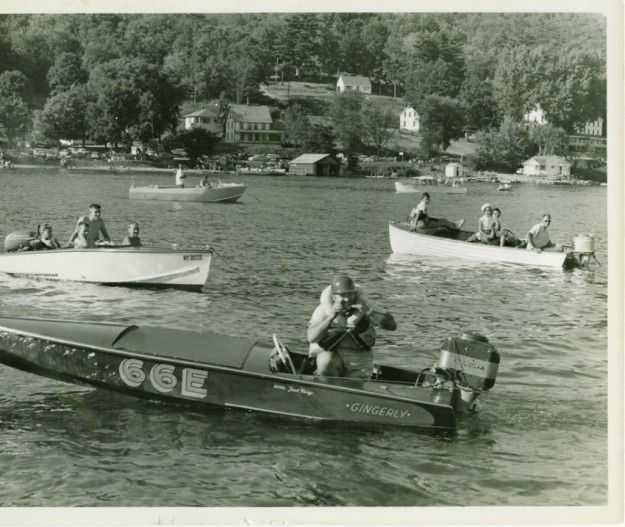 When I was eleven or so, inspired by my grandfather and my uncle, I decided to build an eight foot hydroplane called Minimax (image below) that I saw in Popular Science magazine. I bought the plans and a bunch of lumber, but sadly never got very far. So, forty years later, I am finally getting back to it!

Once I decided for sure that I wanted to build a boat, I had to figure out what to build, and where to build it. And this turned out to be harder than I thought. While our house and our yard is more than adequate in size, there is no great place to build a boat. It is too cold outside in winter, and the garage is full of cars, of all things. So, I decided to repurpose my wine cellar to be my boatbuilding shop,

This cellar, however, is very small. It is about thirteen feet square, with a smaller adjacent storage room that is about seven feet by twelve feet. It is also directly adjacent to a small outdoor pad where I used to crush grapes. As a workspace, this would just have to do. I lugged my winemaking equipment – press, 200 liter tanks, bottler, corker, fermenting vessels –  into the storage room. Then, I set about looking for a small boat to build that I would be happy with.

After poring through loads of web sites and Wooden Boat magazines, I decided to go back to my roots and build a little hydroplane. Really little, since that is all the space I have! I am building a little tunnel-hull boat called the Tunnel Mite, hopefully it will end up looking something half as good as the picture below. I have been having fun learning about lumber, tools, fasteners, epoxy, and how to use them, and am officially under way! I will provide an update or two once I have something worth showing.