For many years Karen and I have shared the dream of spending summers on Northern Lake George in upstate New York. And, with Tyler living full-time in North Carolina and Brian firmly established at school in Connecticut, we decided that 2016 was the year to pull the trigger. After investigating summer-long rentals and discarding them due to high cost and lackluster availability, we got the harebrained idea of purchasing an under-loved property and fixing it up.

After a couple off-season trips to Hague, and some stellar negotiating on Karen’s part, we found ourselves to be the owners of a very humble one bedroom, two bathroom cottage in a fantastic location on the shores of the lake. In late May, we hopped in the truck and drove across the country to our new summer abode.

Little House on the Lake, vacant for seven years before we bought it

Karen was very busy in the weeks before we left for New York, and had a landscaper, a tree guy, and a remodeling contractor all queued up to start work the week after we got there. And we were not disappointed! The contractor, CGM Construction, told us he would have the job done in three months, and with a 12 month and a 24 month remodel under our belts, we privately smirked a little. But we were thrilled to see work begin!

The kitchen was the first room to get demo’d. “Looks better already”, said Karen! 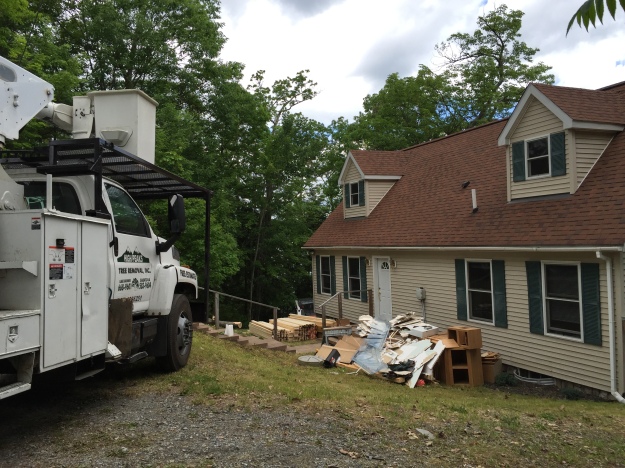 … and we got a dumpster, the first of three that we filled, with our mailbox on it!

Dead trees were one of the first things to go

We had a flat area of the yard that was largely unused, my guess is that it was a septic field at one time. Anyhow, I got it in my head that it would make a great place for a fire pit, and decided to build one. Eight 6×6 landscaping ties, 48 fifty-pound bags of gravel, and a couple loads of boulders from a nearby brook later, the firepit was built. It did not disappoint! A firepit with a world-class view, with smoke that always blows out over the lake, not in your face! 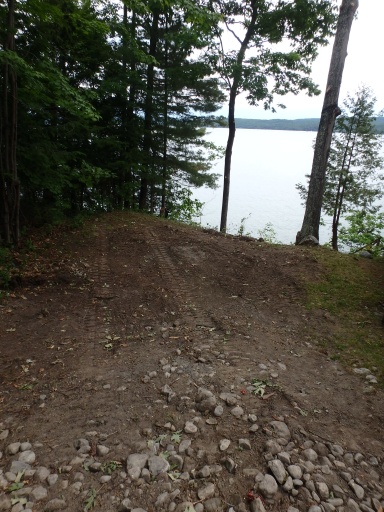 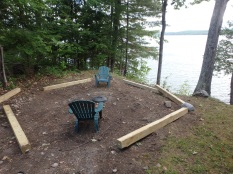 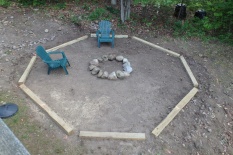 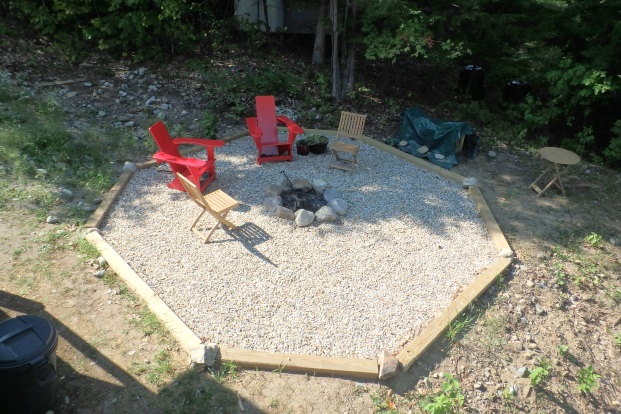 In case you haven’t guessed, we lived in the house throughout the remodel process. Which was no big deal, really, we’d done it before. But, as with the last remodel, cooking was a challenge! Our cooking style suddenly got VERY simple, usually a piece of meat grilled outside, with steamed or sauteed vegetables cooked on the stove. And, we ate out at least once a week, at the Firehouse Grill, the only restaurant in Hague.

They were kind enough to leave us a stove…

… and not much else! 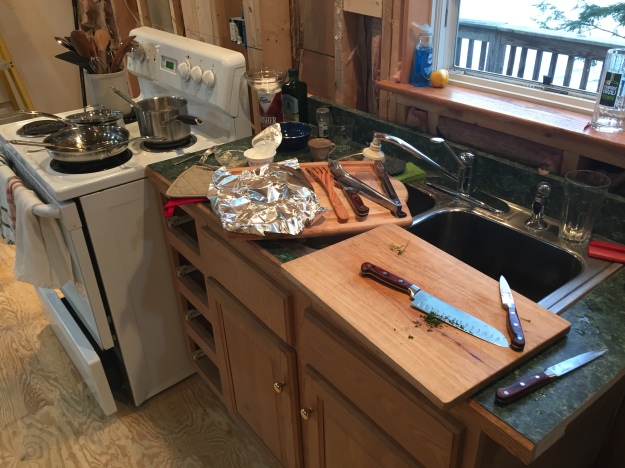 Counter space was at a premium

Cabinets, but no appliances 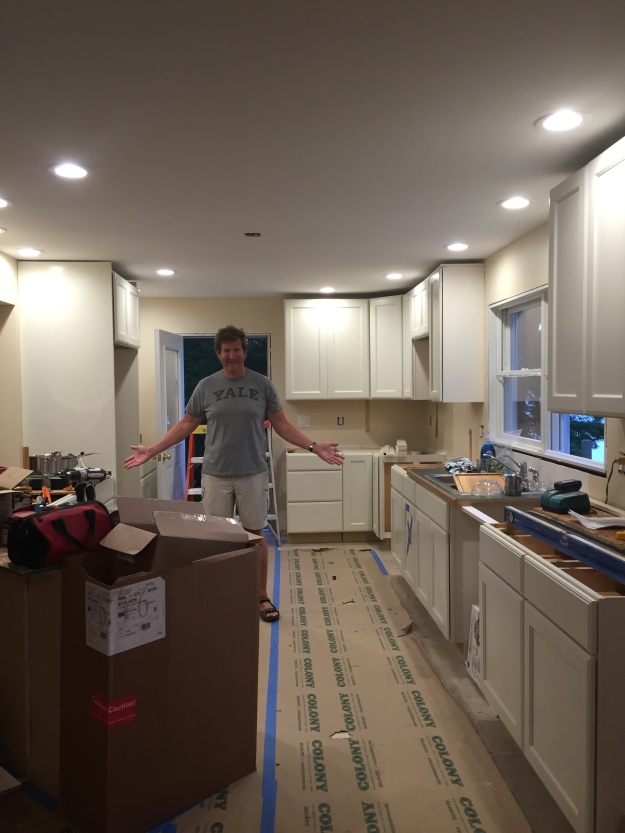 So close, yet so far!

One thing we know we were going to need was a dock. Fortunately, we got hold of The Dock Doctors early in the Spring, figured out what we would need, and placed a deposit. However, I underestimated the bureaucratic maneuvering it would take to get the necessary permits. After all, we were just replacing the decrepit dock that was already there! Anyhow, one day about six weeks after we arrived, we were thrilled to see a barge approaching with a crane on it. And, by the end of the day, we had a dock!

Yay! The barge is here!

And a few hours later, most of the dock was built 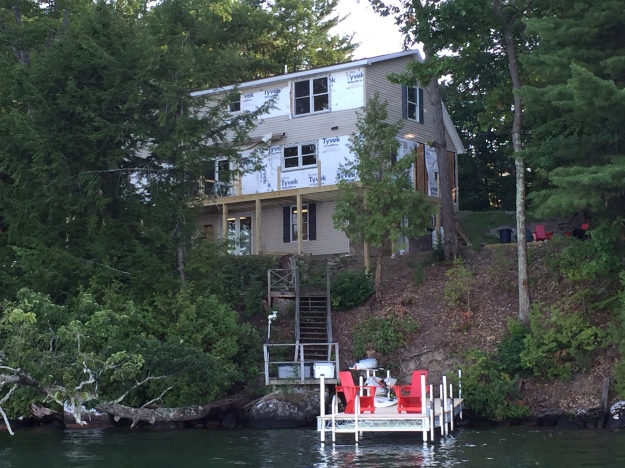 Dock in foreground, worksite/home in background, with firepit to the right 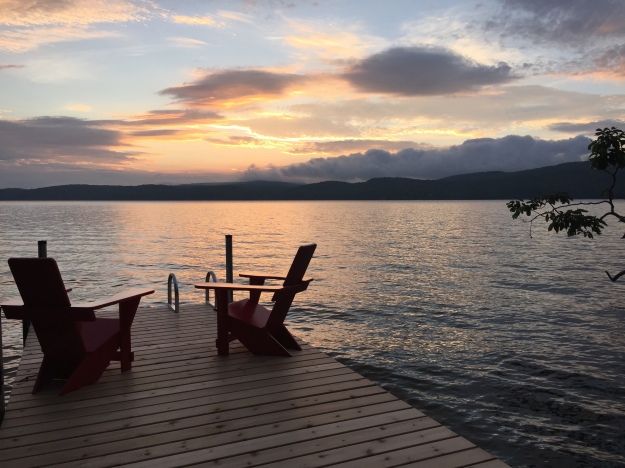 THIS is why we wanted a dock! One of many sunrises we watched, as the workers always arrived at 6:30 or 7:00

Work continued throughout the summer, there was not a weekday where at least one worker (and sometimes up to a dozen!) paid us a visit. And, by August, things really started to come together.

A little aside… early in the summer, we had paid a visit to Sub Alpine Coffee in the High Peaks on one of our many day trips. We saw some cool handmade stools, and found out they were crafted by a small furniture maker in Westport, on Lake Champlain. We paid him a visit, Courtney Fair was his name, and got him to make some stools for us, too. And, a handcrafted counter made with cherry wood to go with it! 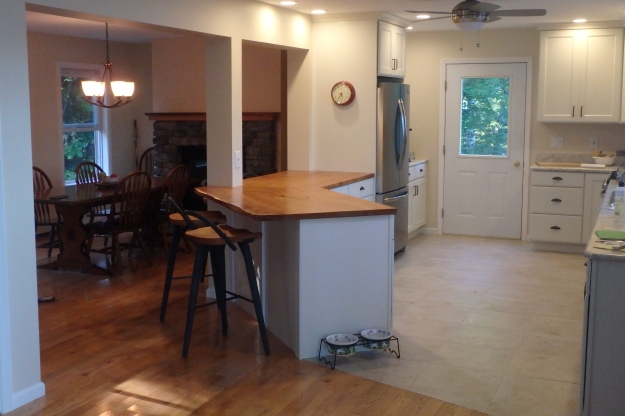 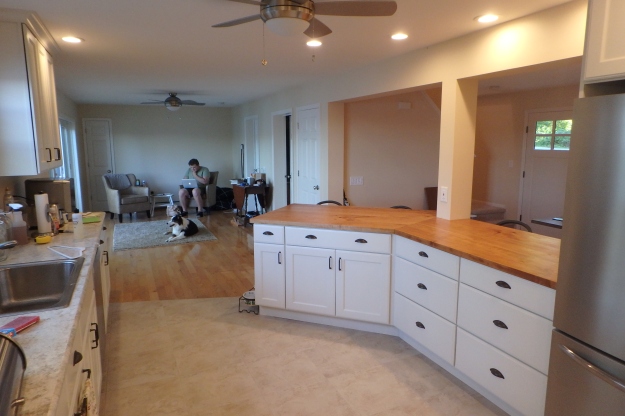 If we had been bold enough to voice a prediction on when CGM would finish the job, we would have been eating crow big-time, because they beat their three-month target by over a week, even while addressing some serious complications. Needless to say, we are thrilled with how the whole project went, and are looking forward to spending a few relaxing weeks in our completed home!

Shown below are a few before-and-after pictures, to give you an idea of what was accomplished. Huge improvement! Not bad for a summer’s work…

Here is the view from the landing of the stairs, what used to be a living room is now the “dining” portion of a great room: 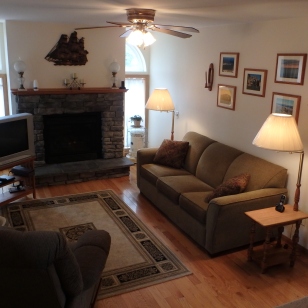 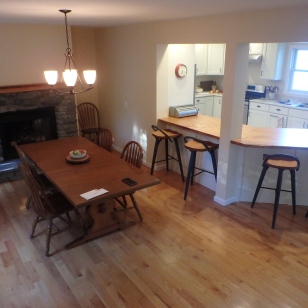 Dead trees and the warped, rotting deck are gone, replaced with a new deck and an awesome view: 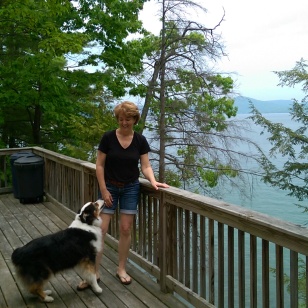 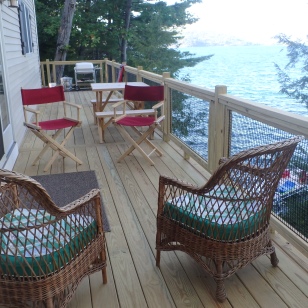 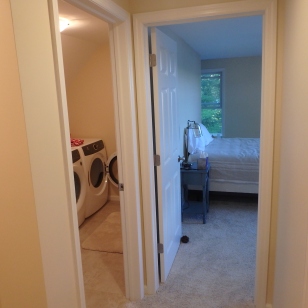 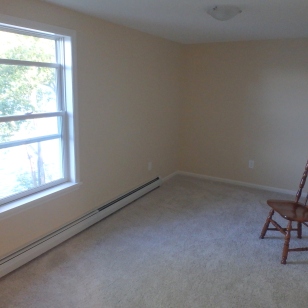 As much as we liked the workers, it is oh-so-nice not to have to wake up early every morning to greet them! Just have a bit of landscaping work to do now, and the project will be complete. Then, unfortunately, it will be time to pack up, and start the long drive back to California!